GABS 2015 draws near and it’s time to start preparing your assault on Australia’s biggest beer festival. I’ve examined the GABS 2015 guide and the 110 plus beers for this year and noticed a few beer styles trending this year:

But basically every area of the taste spectrum is covered across the list and if you like good beer, you won’t find it hard to find something to your liking.

Picking which ones to miss of course will be the hard part. For those new to the festival, anything more than 4 paddles in a session and the beers are going to start to blur together, so take it slow and pick out the ones you really want to try to get the most out of the event.

After much deliberation, here’s my rundown on my top 20 (or 4 paddles worth of) festival beers that I’ll be sure to drink from a mix of tried and true brewers and exciting newcomers. Without further ado… 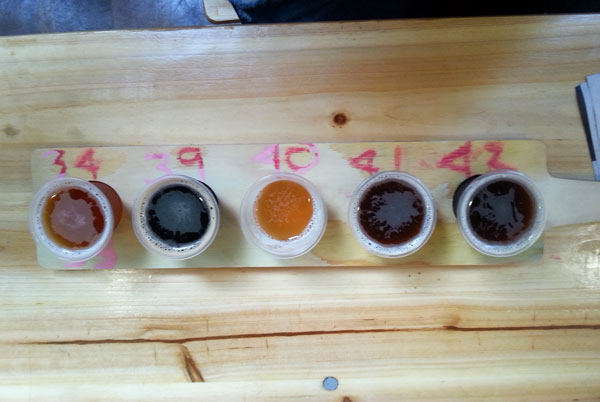 My logic is if a brewer have won a people’s choice award at GABS before then they’re probably a taste. So first on my list is 2014 People’s Choice award winner La Sirene. They’re are on a sour bent this year with a reasonably lightweight 4.5%abv red sour Bebe rouge that I’d expect to be another well-made and classy beer.

QLD’s Bacchus Brewing are set to show that they’re no one-trick-pony after doing dessert-style beers the last two years to great success this time they’re doing a beer take on a classic non-alcoholic beverage with Atomic Lemon, Lime and Bitters.

Yeastie Boys are one NZ brewer who rarely disappoint with their small batch beers. The Not Kettle Black, has a compelling tale of how it came into being (derived from a batch of its great Pot Kettle Black gone wrong) and a tantalizing taste spectrum of flavour descriptors of sour, sweet, acidic, malty and hoppy.

They’ve also collaborated on K9, a chardonnay barrel-aged saison brewed at Lobethal in South Australia along with the Wheaty Brewing team, which sounds like a nice change-up.

There’s some brewers you can always trust to put up a good beer. Bridge Road, a long-time favourite, are going all out with a lambic beer aged in cognac barrels, Creek, that’s definitely worth a shot.

Hunter S. Thompson once said when things get weird, the weird turn pro, and at GABS when the beers turn weird, Young Henrys turn pro. This year they have Midnight in the Carpark of Good and Evil, a rum barrel-aged cherry Flanders ale blended with velvet chocolate stout, which sounds as wonderfully weird as ever.

Garage Project are another unconventional yet always interesting brewer and while I don’t generally like fruity beers a great deal, with the Brett yeast to funk things up, their Bossa Nova Baby 100% Brett fermented Tropical Fruit Cocktail IPA may just be a winner.

And then my nightcap at the event has already decided and it’s a big Russian imperial stout from the veteran Mountain Goat brewery, aged in Lark Whisky barrels and literally called Nightcap. I’ll be hanging out for that one all night.

I love coffee whether it’s before my beer, alongside my beer or in my beer. So the coffee IPA Ruben’s Roast from Willie the Boatman is worth a shake. While BrewCult’s Milk and Two Sugars stout with cold-drip coffee and vanilla beans is another coffee plus beer that has caught my caffeine-addict eye.

Behemoth’s Bogan’s breakfast has a great name, great idea and hopefully a great beer with their brown ale. A bit of bourbon can go well in a beer but can easily overwhelm, so will be interesting to see if they can get the balance right.

There’s nothing crazy in the newcomer Hawker’s Imperial Red but this is a favourite style that promises lots of malt and lots of hops flavour for these beers. In a festival of craziness, they appear to be keeping things simple and tasty and I respect that.

And as I haven’t had the chance to check out the excellent former Temple brewer in action at his new Margaret River home, Homestead Brewery, I’m going to take the chance to sample their black cherry sour beer, Velvet.

I like the idea of a palette reset at some point and Doctor’s Orders Serum is billed as tart and refreshing sour, perfect after all those big hoppy, malty beers.

I’d never considered the potential of carrots in beer before but 4 Hearts Brewing Wabbit Saison will showcase that, and we’ll find out whether it’s a good idea or a bad one. I’m hoping for the former for this beer billed as easy drinking.

After all the madness, at some point I’m going to want a change-up that avoid hoppy bitterness and funky tartness on the tongue and that could be Naked Monkey’s Lamington porter.

Out of left field beers

I loved Golden Gaytimes as a kid so this is perhaps a nostalgic choice to try the Golden Stout Time see if this will this work in a beer. Big Shed already have experience in emulating sweets in beer with BruChoc so they may just trigger some happy childhood ice cream memories with this one.

7 Cent’s Beer is Over is a beer with hipster ingredients such as kale, quinoa, and lentils, which seems whacky, tacky, and perhaps going for the novelty factor, but goddamit if I don’t want to give it a go, just to see how these ingredients do work out in a beer. They made rocket work in a beer last year and I’m banking they can somehow pull it off again.

Finally, Black Hops are a newcomer and their oyster stout Kill Patrick has an array of ingredients and promising hints of sea, bacon and Worcestershire sauce, which could make it one of those out-there whacky but delicious beer experiences that you’re only likely to find at GABS.

So there’s my picks for GABS 2015, good luck in coming up with your own. And whatever you end up drinking at GABS, enjoy!